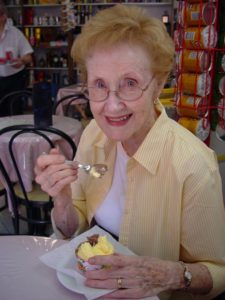 June enjoyed a cup of gelato every day during a family trip to Italy in 2006.

There’s a line from the movie, The Wizard of Oz, that says, “A heart is not judged by how much it loves, but how much it is loved by others.” As one friend said, “June Stanton was warm, kind, intelligent, generous, and a role model. June had a great smile, too. She gave her time and energy to help people, and in doing so, she set an example for others. The world would be a better place if there were more June Stantons.” June passed away on Thursday, March 26, 2020, leaving behind a legacy devoted to serving her community.

June was very active in her local community. Beginning in the 1960s, she was an integral member of the Altar Guild of the Prince of Peace Episcopal Church and was also active with the New Horizons School for handicapped children.

One of her greatest accomplishments was to be a founding member of Valley Village, a non-profit organization in the San Fernando Valley which provides housing for developmentally disabled adults. It began in 1971 when George and June had the idea of providing a permanent home to their daughter, Kathleen. Joining with other parents with similar concerns, they eventually founded Valley Village, which now provides 18 group homes, nursing facilities, and educational day programs, enriching the lives of 400 adults with developmental disabilities. June continued to contribute throughout the growth of Valley Village, making curtains and bedspreads for the first home, serving as the organization’s bookkeeper, volunteering at their Thrift Shop, then serving as the Financial Director until her retirement in 1996. In 2002, June was a founding member of the Valley Village Foundation, where she served as secretary until 2014. As many people have shared, June was Valley Village.

When the first Valley Village residential homes were established, the parents of children who came to live in those homes invested their own time and money. They bought the sheets blankets, bedspreads, kitchenware, and everything that was needed. They opened a thrift shop around the same time to help support the organization. Volunteers successfully and entirely oversaw thrift shop operations.  Judy Hawthorne, a Valley Village parent, tells of the thrift shop’s early days, “I remember June calling and asking how much money we had in the drawer. When I’d tell her, she’d say ‘I’ll be right there, I have to make payroll!’  That’s how tight things were at that time.  I have no doubt that June would reach into her own pockets to be sure our staff was paid.”  The Thrift Store continued for 25 years until it closed.

Kitty Cooper, another Valley Village parent, found June’s commitment to Valley Village, its mission, and its clients and inspiration.  As time moved on and new families stepped up and into new roles as board and committee members, they valued her historical knowledge and her willingness to step in whenever needed.  “I’m happy to have known her and learned from her.”, said Kitty.

“June had endless patience, always looking like the fashionable lady that she was.”, Judy shares. “She never had a hair out of place and was always well turned out. She took charge of that office and always knew where something was and kept the books and payroll current.  She was a delight to talk with and so knowledgeable. I never heard her raise her voice to anyone.”

Laura Engel first met June at Valley Village’s small office on Darby Street in Reseda when she decided to volunteer there. Laura shared about June, “Her enthusiasm was contagious.” June guided each volunteer to pitch in and do what was needed. “To June, nothing was impossible. We just had to find a way to do it. Onward and upward was her motto.” Eventually, Lynn Robinson and Fred Chapa became the co-directors of Valley Village. The organization grew to have five group homes for adults with developmental disabilities. Between the thrift shop, Steak Fries (an annual fundraiser event), Women’s Garden Luncheons, some government funding, and surplus food supplies, Valley Village was surviving and growing slowly. June kept track of the money coming in, as well as how it was dispersed. She worked tirelessly and went without a salary for many years. She was a visionary who demonstrated integrity in all she did.

June always felt that Valley Village could grow and improve. She was understanding of the care providers and clients, listening to their concerns. Their safety, health, and happiness were the priorities guiding her decisions. Valley Village did grow, moving from Reseda to Northridge and to Winnetka where we are now. Valley Village’s staff grew, and nurses were added to the team. Group homes were converted to Intermediate Care Facility (ICF) homes while day and after school programs were added. June made herself available to whomever and wherever she was needed.  Valley Village grew to surpass her dream for the organization, and she was proud of the people – both clients and staff – who honor her legacy. Looking at Valley Village today and the legacy June helped create, the staff and clients embody June’s spirit.

June wasn’t just one of the founders of Valley Village. She was the matriarch of Valley Village. As Dolores Zimmermann said, “June was the one with the ‘steel trap’ mind.” She helped with historical records, assisted with protocols, and served on committees. June had a can-do, women are strong, and let’s-do-it attitude. She didn’t shy away from projects even after stepping away from various roles. She helped with the annual Showtime! Comedy Luncheon until she was 94. 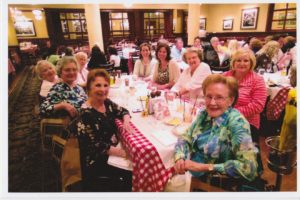 A group of the founding mothers of Valley Village worked very closely together over the years and became great friends. One day Joan Freeman, Laura Engel, Dolores Zimmermann, Judy Hawthorne, and June decided to go out to dinner.  They had such a nice time that they’ve been going out ever since, one day a month, usually at a different restaurant. They become the “ladies who lunch,” explained Jenny Daniels Freese, June’s friend, and former Valley Village Development Director. It wasn’t until the last two years or so when June’s health started to decline that the ladies met at Maggiano’s Restaurant, which was in the valley near June’s home.  June always looked forward to these outings, and so did her friends.

Valley Village’s Executive Director, Debra Donovan, shared her feelings about June and their relationship over the years. “I feel lucky to have known June. She was a wonderful woman and a great mentor to me. I will miss being able to pick up the phone to get her opinion on Valley Village issues of the day. Often, she would offer me gentle insight, assure me that she had confidence in my decisions, and tell me to ‘carry on’. Through the legacy that June and her founding comrades created, Valley Village will carry on and thrive.”

Laura Engel speaks for a lot of people who knew June when she shared these thoughts. “June was a large part of my life. She instilled confidence in me and guided me to accomplishments I never would have tried. She had a great sense of humor. June was one of the most intelligent people I ever knew.” June was a great inspiration. She made those around her feel more capable and filled people with a can-do spirit. We will miss her dearly.

Due to the Covid-19 pandemic, a small family burial ceremony was held on April 6, 2020, at Oakwood Memorial Park Cemetery in Chatsworth.   A celebration of life will be held in a few months after all shelter-in-place orders have been lifted. Donations in her memory can be made to Valley Village at www.valleyvillage.org.

We leave you with the following is a poem, What is so rare? June’s dear friend, Dolores Zimmermann, wrote this poem as an ode to June.

What is so rare?

The poets describe it,
In prose and in song

Need a job done to perfection,
On time?

Figuring costs,
Right down to the dime!!

“I’ll do it” she says with a smile,
And off she is running the four-minute mile.

With checks, typing, painting and bookkeeping chores,
Also on duty for re-hanging doors!!

What poets describe, is a rare day in June,
So they claim

But our rare June,
Is a Stanton by name

Our June is devoted, unselfish, loving by nature,
And truly a dear,

How lucky we are,
A rare June every day of the year.