One of our highest priorities at Valley Village is taking a person-centered approach to care. We believe in getting to know our clients personally so that we can understand their goals, priorities, and, of course, interests. We tailor activities and outings to assist our clients in maintaining their physical and social skills and exploring the things that mean the most to them. 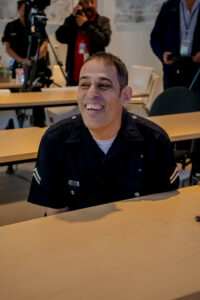 On Tuesday, November 15th, the LAPD helped Valley Village make a lifelong dream come true for one of our clients, George!

George is a native Angeleno. He was born in Panorama City and lived as a child in Sun Valley and Granada Hills. His father, George, was a labor commissioner for the State of California, and his mother, Maria, was a schoolteacher and a devout member of her church. George’s interest in community service and justice started early on. As a child, George’s favorite television shows were Adam 12, Emergency, and CHIPS. Characters like Officer Pete Malloy, Officer Reed, Paramedics “Johnny and Roy,” and Highway Patrolmen “Ponch and Jon” were not just fictional television characters to George – they were heroes and role models. 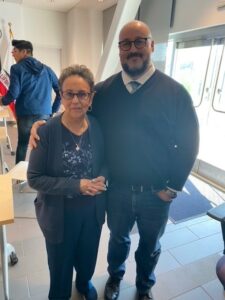 George’s family was present at this special day.

As an adolescent, George’s parents moved their family to the small rural horse
Community of Acton, California. One day while patrolling the local dirt roads on his bike, George’s shoelaces became entangled in the bike’s chain. While George was trying to free his shoelace from the chain, Los Angeles County Sheriff Deputy Fred Fate found George on the side of the road and helped George free himself from the bike chain. Deputy Fate loaded George’s bike in the back of his Sheriff SUV and gave George a ride home. George knew that from this point on, he would dedicate his life to supporting all law enforcement officers, hoping for the day that he could become a law enforcement officer. To this day, George still speaks of his favorite officers he has met! 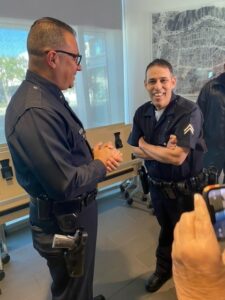 Anyone who knows George knows he is always smiling and usually has a badge on his person. He is quick to ask you if you have another badge or even a law enforcement shirt or hat for him, so he can proudly wear the same!

Originally, George’s house administrator Angie intended to arrange a tour of a precinct and a few authentic souvenirs, but when the LAPD learned about George and his dream, they decided to roll out the red carpet for him! The day became something so much more than any of us could have dreamed. 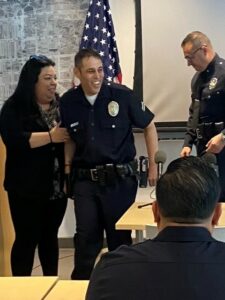 Angie and George as he takes his oath!

LAPD held A Day With George at the Los Angeles Northeast Margaret “Peggy” York station. With his mother, brother, Valley Village house-mates, and many friends in attendance, George’s dream came true as he was welcomed into the station by a lineup of officers, applauding, shaking his hand, and saying, “welcome to the LAPD family!” He was outfitted for his own LAPD uniform and given a personal tour of the station by Captain Chris Waters. When he attended roll call with the other officers, George called out, “I’m ready!” and everyone in attendance knew he most certainly was!

Captain Waters asked George to raise his hand and take the LAPD oath: “During your tour of duty to protect and serve all citizens, both young and old, to the best of your ability, and do you pledge to do so with truth, safety, and care throughout the day?” George answered affirmatively and let us all know he was ready to “go catch some bad guys!” He was given a badge for the day, number 13958, and the surprises didn’t stop there! 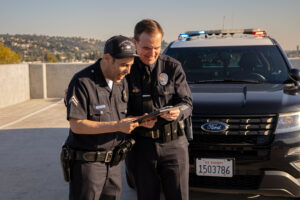 Captain Waters assigned George a partner for the day, and he started by taking him on a ride-along with all sirens and lights going. He was stationed at Griffith Park, passing out flyers, and even treated to a flyover from a helicopter. One of the most special surprises? The helicopter pilot was a former Valley Village staff member and George’s coach from when George competed in the 1984 Special Olympics!

Watching the surprise and happiness on George’s face as he was ushered into the police station to become an honorary member of the LAPD is an experience no one in attendance will ever forget. Local media covered the event, including an appearance on the ABC Channel 7 and CBS 2 news! Valley Village is so thankful to Captain Waters and the members of LAPD Northeast for making George’s lifelong dream come true and for their dedication to the community.